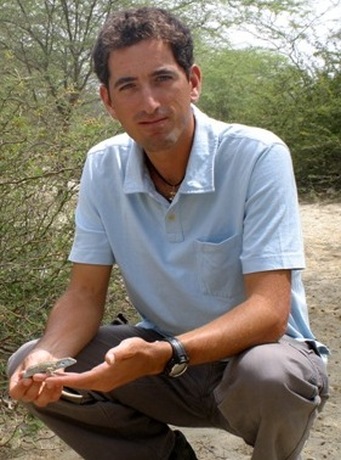 Alessandro Catenazzi, PhD - Associate Professor
My research interests are the systematics and conservation of Neotropical amphibians and reptiles, and the ecological dimensions of biodiversity. For the first line of research, I work primarily in the Andes and the Amazon. I collaborate with colleagues in museums and other research institutions in describing new species and developing phylogenies of frogs from the mega-diverse eastern slopes of the Andes. I am interested in using phylogenies as a road map to compare and contrast physiological traits among species, As part of these investigations, my collaborators and I are studying thermal preferences, tolerance to heat, and the influence of temperature on physiological functions, in order to understand how climate warming will affect these animals. Finally, a major theme of my current research is exploring the effects of fungal disease on the ecology of amphibians, a group that is experiencing staggering biodiversity losses worldwide. After documenting the collapse of a species-rich amphibian assemblage, I am interested in developing strategies to mitigate the impact of the fungal disease chytridiomycosis on surviving species. I'm an Amphibian Red List Authority and an Associated Researcher with CORBIDI. 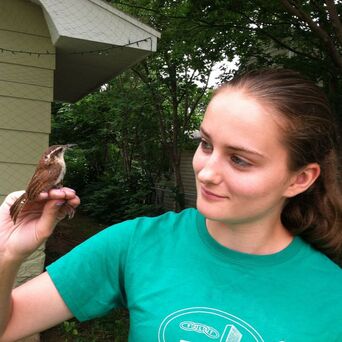 Anne Sabol - PhD candidate
I'm originally from Ohio (Go Bucks, right Rachel??), where I got my Bachelor's degree in Zoology from The Ohio State University. During undergrad I studied cichlid personality and UV vison and participated in an REU at Oklahoma State University, focusing on bluebird nestling ecology. I then got my Master's degree at the University of Michigan in Dr. Ben Dantzer's lab, studying prairie vole sociality. After graduating, I worked for the San Diego Zoo Conservation Research Institute in Hawaii studying the behavior of the highly endangered 'alala (the Hawaiian crow). During this project I realized I wanted to move my research more in a conservation direction, so I am excited to focus on combining conservation and behavior in amphibians for my PhD.
Profiles:  ResearchGate | ​Google Scholar | 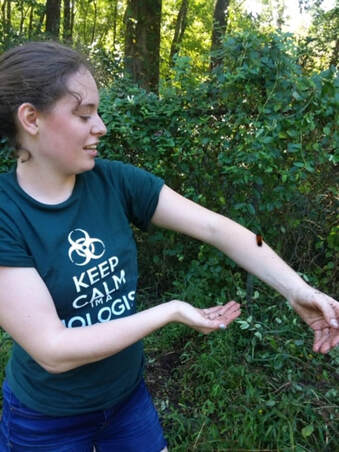 Rachel Prokopius - PhD candidate
I am a life-long Ohio resident, and have lived in two opposite corners of the state. Go Buckeyes (sorry, not sorry, Anne)! I received a Bachelor’s degree in Science with a chemistry minor from Northern Kentucky University, an area containing some of the highest amphibian diversity on the planet. During undergrad my research focused on macroinvertebrate bioenergetics and their contribution to the inner workings of lotic systems, as well as the conservation status of big-game fish in Caribbean waters. My macroinvertebrate research took me to Karlstad, Sweden for six months and factored into my Honors Thesis, which compared macroinvertebrate biomass and attributes between two biomes. I was also able to spend three weeks in Belize comparing presence and size of economically-important marine species between conservation and general-use fishing zones off the Belizean coast. My research interests are not necessarily limited to one group of organisms; I think all animals are freaking awesome! My Ph.D. work focuses on animal behavior and the connection between it and the conservation of various species and populations of organisms. My interests include niche partitioning, intra and interspecific competition and invasive species. 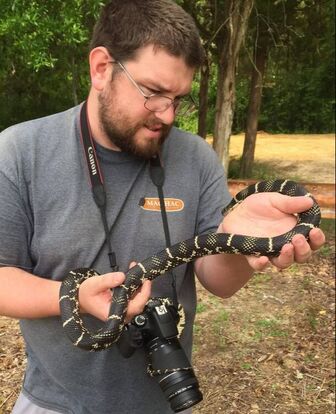 Jon Adamski - PhD student
Hey all! I am originally from northeastern Pennsylvania. I went to East Stroudsburg University (ESU), PA while using my GI Bill to pursue my Bachelor of Science in Biology. I conducted minor research while pursuing this degree that focused on exploring the range limits of two rare species, the eastern fence lizard and eastern worm snake, in northeast Pennsylvania. I continued at ESU to pursue my Master under Dr. Thomas LaDuke, where I primarily worked with the timber rattlesnake and ArcMap to measure how anthropogenic habitat features affect population size. Across both degrees I worked on many different projects to gain the most diverse background possible. These projects focused on Hymenoptera pollinators, raptors, songbirds, bats, bears, and many amphibian species. Ultimately, I want nothing more than to be a professor while working on meaningful research. My research interests include herpetology, entomology, conservation, ecology, education, and museum maintenance and preparation. I am studying chytrid transmission among various frog species in Peru as part of an NSF grant within the lab.​

Cara Giordano - PhD student (starting August 2022)
Originally from Virginia, I graduated from the University of Virginia with a bachelor's degree in biology and environmental sciences, with a specialization in conservation. My undergraduate research investigated natural and sexual selection in brown anoles, focusing primarily on the role of secondary sexual characteristics as honest signals of male quality. After graduating, I moved to DC and worked for the National Park Service conducting invasive plant management in the DC metropolitan area. I have research interests in conservation, disease, and evolutionary ecology. I am particularly interested in investigating species responses to environmental changes induced by human activity. 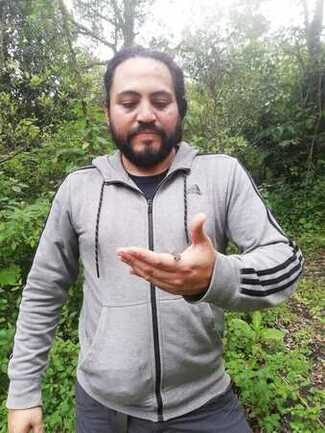 Gustavo Ruano - PhD student (starting August 2022)
I am a Biologist from Guatemala with an interest in amphibian ecology in the Neotropics. During my undergraduate studies at the Universidad de San Carlos de Guatemala – USAC, I investigated salamanders and bromeliads interaction. After graduating, I was awarded the OAS scholarship to gain a master’s degree in Brazil at the Universidade Federal de Alagoas -UFAL; I researched bromeligenous amphibians and their risk of infection with the chytrid fungus in the Northeastern Atlantic Forest of Brazil. My current research interests are the amphibian microbiome, host-pathogen interactions, and bromeliads micro-ecosystems. Bromeliad tanks are important for amphibians in
the current global change scenario, as environmental refuges from diseases, climatic change, and habitat loss. Understanding amphibian dynamics within this microhabitat could be fundamental for amphibian diversity in a global change scenario. 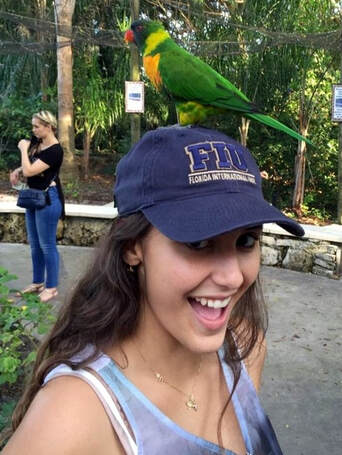 Helena Miranda - Undergraduate student
I am a Biology major with a Chemistry minor at FIU and part of the Biology Honors Program. I aspire to go to medical school and am currently on the Pre-med track, so hopefully I’ll be starting medical school in 2022 after a gap year. I was born and raised in Brazil, in a city named Belo Horizonte, and moved to Miami in 2016. I love living in Miami because I’m always 5 minutes away from the beach and Miami has a constant summer year round. 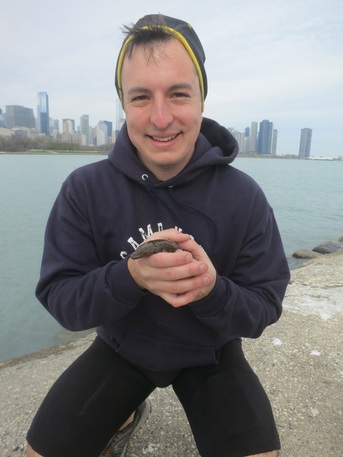 Dr. Alex Shepack -  PhD (Fall 2020)
I hail from the land of Dunkin Donuts and traffic circles, the greatest state in the Union, Connecticut (sorry David).  I recently finished my Masters in Environmental Science from the Yale School of Forestry and Environmental Studies examining the effect of urbanization on amphibian populations (w/ David Skelly).  Prior to that I worked on oviposition site choice in gray tree frogs at the University of Connecticut (w/ Mark Urban). Since 2008 I’ve been working in Costa Rica with the Forman School Rainforest Project, a high school group focusing on biological monitoring. At FIU i’m excited to return to the Neotropics to work on my PhD.  I’ll be studying amphibian community composition and rebounding populations in Bd enzootic areas.  I’ll be focusing on the dynamics and genetic structure of rebounding populations, causes for rebounds and overall community structure changes since the declines began.  For more info on my current or past research check out my website!
Profiles:  ResearchGate | Google Scholar |
Now Post-doc at the University of Notre Dame 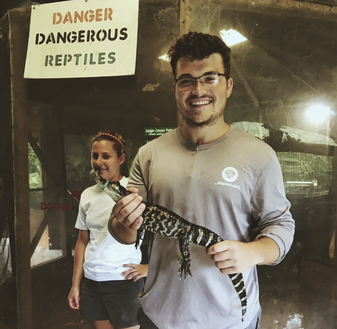 Matt Morris - MS (Summer 2021)
I hail from the land of chicken wings and seasonal depression, the intellectual nucleus of the United States: Buffalo, New York. In 2014, I moved from sumptuous Buffalo to St. Petersburg, Florida where I obtained my B.S in biology from Eckerd College. I now am a second semester master’s student in the lab. During my time in the Catenazzi lab, I will be working with the critically endangered Florida Grasshopper Sparrow, specifically, researching the disease aspects of their recovery program. Read more about sparrow research here. 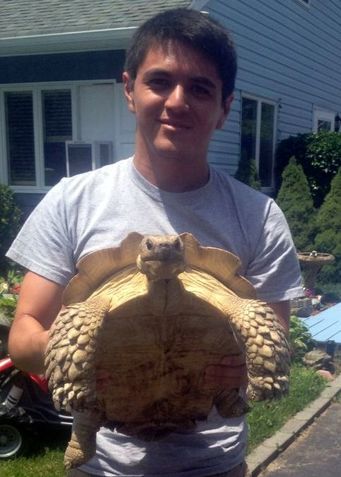 Andrew Rubio - MS (April 2019, SIUC)
I attended SUNY Oswego for my undergraduate, obtaining a Bachelor of Science in Zoology. My ultimate goal is to utilize the knowledge I receive throughout my education and carry out research projects that will contribute  to the conservation and management of endangered species. I am especially interested in the conservation of Neotropical amphibians. At Southern Illinois university, I aspire to better understand the effects that chytridiomycosis has had and continues to have on amphibians. I am also interest in how ecosystems are altered due to the reduction of amphibian diversity. I am hoping that my research here will pave way in developing adequate conservation plans that will help conserve and reduce the loss of amphibian diversity.
​Now PhD student in Kyle Summers lab at ECU 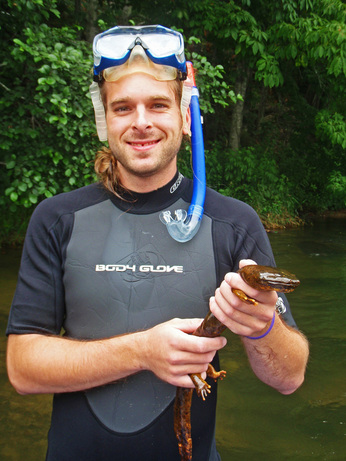 David Burkart - MS (December 2015, SIUC)
I come from North Carolina, home of everything great and wonderful from Krispy Kreme donuts to the world's highest salamander diversity. Luckily it was the latter, not the former, that caught my interest during my formative years and inspired my passion for nature, particularly, herpetology. I received my B.S. in Biological Sciences from N.C. State University. Following my graduation, I pursued varied dreams by conducting field work in both the southeast and South America in between touring the United States in a rock and roll band. My interests in both herpetology and conservation channeled my pursuits towards studying chytridiomycosis, eventually leading me to the Catenazzi lab at SIU. Here I have focused my efforts on the natural methods that make frogs resistant to the disease and how these can be applied towards mitigation strategies. In particular, I am investigating why two closely related species of marsupial frog differ in their response to chytridiomycosis - one is resistant and one susceptible. Using analytical techniques like mass spectrometry and next generation DNA sequencing, I identified the compositions of each species' antimicrobial peptides and cutaneous bacterial symbionts, two amphibian defense mechanisms that have been linked to chytridiomycosis resistance.
Now a Biology Instructor at Montgomery College 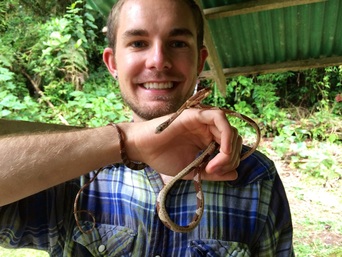 Brandon LaBumbard - MS (December 2015, SIUC)
I am from a small town north of New York City in the beautiful Catskill Mountains. I attended SUNY Oswego for my undergraduate and graduated in 2012 with a BS in Zoology and a minor in Chemistry. I enjoy researching amphibians and turtle conservation. I am now a Master’s student in the Catenazzi Lab at SIUC working on amphibian decline in Peru caused by the pathogenic chytrid fungus, Bd. The research I conduct focuses on community effects and species roles in the transmission of Bd.
Now PhD student in Doug Woodhams lab at UMASS Boston 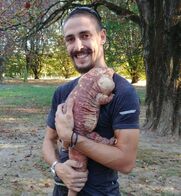 Enrico Vezzani - Researcher (University of Modena)
I come directly from Italy where I got my bachelor in Natural Science, at the University of Modena and Reggio Emilia. I always had a deep passion for reptiles and amphibians and my goal is to be involved in reptile conservation and management. I started my adventure here in Florida assisting James Stroud in his research on Anoles and later on I volunteered at ZooMiami. Right now I’m primarily helping Catenazzi in his research on Bd, while I also carry out some personal projects, like salmonella infection on freshwater turtles. 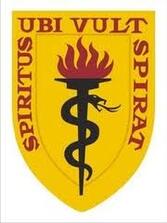 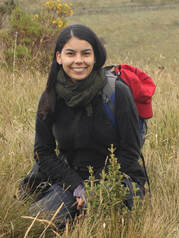 Lina Agredo - Undergraduate student (Icesi University)
I am a Biologist with emphasis in Molecular Biology and Biotechnology from Icesi University located in Cali, Colombia. My research interests are Animal Physiology and Molecular Biology. I participated in a project that studied mechanisms of neuroprotection against ischemia, which later on became my undergrad thesis. I undertook the study of hypoxic pre-conditioning in cerebral primary cultures, learned various procedures and techniques such as MTT cell viability assay, immunofluorescence and immunocytochemistry. Although my projects have mainly focused on Lab related work, I am also interested in (and love) field work. I participated in the 2016 international Bird Fair of Colombia and have a general interest in Conservation and Ecology, specifically in Amphibians and diseases, which led me to the Catenazzi Lab. I analyzed measurements of field body temperatures during summer 2018.​